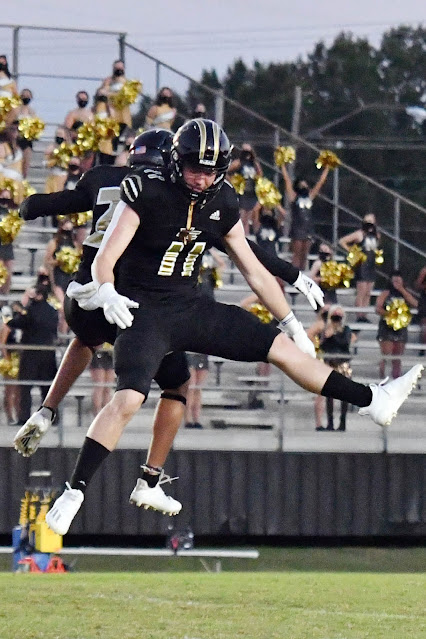 The Northeast Mississippi Community College football team finally earned the right to celebrate after its most unorthodox offseason in program history.

Northeast christened its highly anticipated 2020 season with a 35-10 triumph over Holmes Community College on Thursday, October 1 at Tiger Stadium.

“It’s special to be back on this field. It felt kinda surreal to be out here,” said Tigers head coach Greg Davis. “I couldn’t be more proud of this group. Trying to get prepared has just been tough. It’s been a roller coaster.”

It was Northeast’s second consecutive season and home opening victory. The Tigers started the 2019 campaign by defeating Southwest Mississippi Community College in a thrilling matchup that went to overtime.

Northeast produced points in all three phases of the game beginning with special teams. Scott Norphlet forced a fumble on a punt attempt by the Bulldogs and recovered the loose ball in the end zone for a touchdown with 4:55 left in the first quarter.

Holmes cut its deficit to 7-3 early in the second period on a 40-yard field goal by Blake Backel. However, the Tigers (1-0, 1-0) responded with less than one minute remaining before halftime.

JT Moore connected with Andison Coby in what was the first collegiate touchdown for both standouts. The 29-yard strike couple with John Ellis Murrah’s point after brought Northeast’s lead to 14-3 at the intermission.

The Tigers’ defense got involved in the scoring after the break. Carter Bonds picked up a fumbled lateral pitch by the Bulldogs near the 25-yard line and then dove across the goal line to increase Northeast’s advantage to 21-3.

It was the first defensive touchdown for Bonds, who finished tied for third in the Magnolia State in total tackles with 178 during his senior year at Corinth High School, at any level.

“I had a dream about it the other night actually. The same play. It was really weird,” Bonds said. “I chased the backside of the running back and the ball popped out. I saw it and luckily enough I was there to scoop it up and run as hard as I could to the end zone.”

It took the Tigers only three plays to go 80 yards on their initial possession of the second half. Kevin Hurley capped the drive with a 64-yard touchdown pass to Cam Coleman to lift Northeast ahead 28-3 just past the seven minute mark of the third quarter.

Coleman, who transferred from Western Michigan University, topped the wideouts with game-highs of seven catches and 113 yards during his debut in the City of Hospitality.

“This is a blessing from God to get out here and show our talents and our abilities,” said Coleman. “It felt very good to get back out here and play. The receiving corps worked very hard. We did what we had to do.”

Dallas Payne sealed the win for the Tigers with a 15-yard touchdown toss from Moore with 11:35 to go in the contest. Shawn Dalton Weatherbee set up the score with a 25-yard run three plays earlier.

Walter Ivory accounted for Holmes’ lone touchdown with a 14-yard run in the fourth period. Northeast outgained the visiting Bulldogs (0-1, 0-1) offensively by a 418-219 edge in yardage.

Hurley and Moore combined to complete 66.7 percent of their passes for 243 yards and three scores. Weatherbee paced the Tigers on the ground with 94 yards on only nine touches.

The Tigers return to action on Saturday, October 10 for their inaugural road trip of the campaign to Mississippi Delta Community College. Kickoff is scheduled for 2 p.m. at Jim Randall Stadium in Moorhead.

Northeast Mississippi Community College wide receivers Alex Cornelison (11) of Iuka and Jey Johnson (24) of Ripley celebrate after the Tigers’ opening score of the night against Holmes Community College. Northeast captured its second season opening win in a row with a 35-10 win over Holmes on Thursday, October 1, 2020, at Tiger Stadium in Booneville.