Tigers, Bulldogs Set to Tangle for Second Time This Season 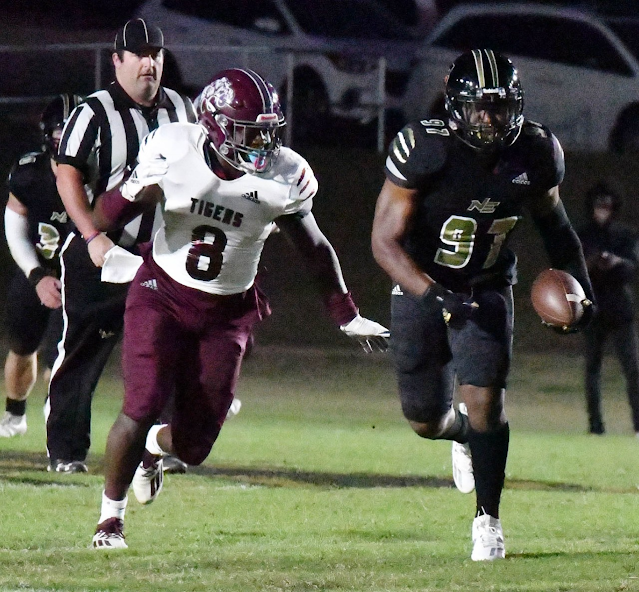 The Northeast Mississippi Community College football team is hitting the road as its abbreviated 2020 campaign enters the home stretch.

The Tigers travel to Holmes Community College on Thursday, October 29. Kickoff in the second meeting of the season between these two programs is set for 6:30 p.m. at Ras Branch Stadium.

Those that cannot attend the contest can watch it live and in high definition on NEMCCTV. Tune in beginning at 6 p.m. for the pregame show by visiting www.nemcctv.com on any computer, smartphone or tablet device.

Amazon and Roku television subscribers can also view each of Northeast’s gridiron matchups by searching for “Northeast Mississippi Community College” on each respective app. The NEMCCTV feed will air on WRMG-TV in Red Bay, Ala., and Tishomingo County as well.

The Northeast Broadcasting Network also includes radio affiliate WOWL Fun 91. An audio simulcast featuring Carter Smith, the Voice of the Tigers, can be heard on frequencies 91.9 FM from Burnsville, 92.9 FM from Florence, Ala., and 102.3 FM from Killen, Ala.

Northeast and the Bulldogs have never met each other twice in the same year until now. The last time that the Tigers tangled with the same team two times in a season was in 1987 against Hinds Community College.

The Tigers opened their campaign on October 1 with a 35-10 triumph over visiting Holmes on the Booneville campus. It spurred the first 3-0 start to a season by Northeast since 2011.

Northeast held the Bulldogs to 219 yards of total offense while racking up 418 yards of their own. Quarterbacks Kevin Hurley of Walnut and JT Moore from Shelby combined for 243 passing yards in the win.

However, Holmes has not competed since its trip to the City of Hospitality due to concerns surrounding the coronavirus. The Tigers oppositely now hold a 3-1 record and a No. 28 national ranking in the JCGridiron Dirty 30 poll.

“It’s weird that we’re playing somebody twice in the regular season,” said Northeast head coach Greg Davis. “What’s even weirder is the face that we’ve played four games and they’ve only played one.

“I don’t really know what to anticipate. They prepared for two months to play us like they did in the first game, but then they were off for two weeks. So I would think that defensively and offensively they’re going to be very similar to what they did.”

The Bulldogs (0-1) attempted only seven passes during the first tilt while nine different athletes had at least one carry. Devontaye Bankston topped Holmes with 94 rushing yards on 19 touches.

Hurley has emerged as one of the top signal callers in the Mississippi Association of Community Colleges Conference (MACCC). He currently leads the league in total passing yards with 696 and touchdowns through the air with eight.

Andison Coby from Fort Lauderdale, Fla., has been one of the go to wideouts for whoever is behind center for the Tigers. He has six receiving touchdowns, which is most in the MACCC, with at least one in each contest so far.

Corinth’s John Ellis Murrah has helped Northeast excel in the special teams department. He has made all 15 of his extra point tries and is 3 of 4 on field goal opportunities.

Murrah is also fifth in the Magnolia State with a solid average of 37.4 yards per punt. Eleven of his boots have landed inside the 20-yard line, which is second most in the conference.

The Tigers’ defense is once again at the top of the charts in multiple statistical categories, including in sacks with 19. That is eight more than second place Itawamba Community College.

Tunica’s Reginald Hughes paces that effort with 3.5 sacks to his credit while Willie Latham, III from Ridgeland follows with three sacks. Jamarcus Smith is second in the state with 11.5 tackles per outing.