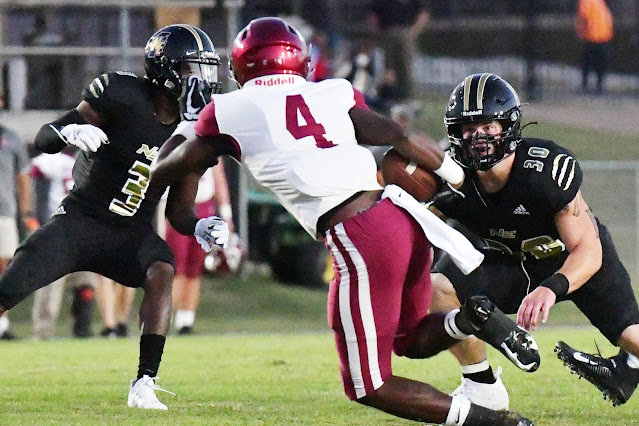 The Tigers’ week two Mississippi Association of Community Colleges Conference (MACCC) North Division contest against the Trojans is being moved to Friday, October 9 due to potential inclement weather from the major hurricane.

Kickoff is now scheduled for high noon at Jim Randall Stadium in Moorhead. Northeast and Mississippi Delta were originally slated to meet at 2 p.m. on Saturday afternoon.

“I’m really excited that we’re moving this game to Friday. This is the right move,” said Tigers head coach Greg Davis. “I think the kids are excited. They’re just ready to get another day of competition under their belt. The positive is we practiced every Friday in fall camp at 10 o’clock so I think we’ll be ready to play.”

Those that cannot attend the matchup can watch it live and in high definition on NEMCCTV. Tune in beginning at 11:30 a.m. for the pregame show by visiting www.nemcctv.com on any computer, smartphone or tablet.

Amazon and Roku television subscribers can also view each of the Tigers’ gridiron contests by searching for “Northeast Mississippi Community College” on each respective app. The NEMCCTV feed will air on WRMG-TV in Red Bay, Ala., and Tishomingo County as well.

The Northeast Broadcasting Network also includes radio affiliate WOWL Fun 91. An audio simulcast featuring Jody Presley and Carter Smith, the Voices of the Tigers, can be heard on frequencies 91.9 FM from Burnsville, 92.9 FM from Florence, Ala., and 102.3 FM from Killen, Ala.

Northeast is coming off a 35-10 home victory over Holmes Community College. The Tigers outgained the Bulldogs by nearly 200 yards and forced three key turnovers defensively.

Quarterbacks Kevin Hurley from Walnut and JT Moore of Shelby mixed in-and-out all evening and were very efficient. The duo combined for nearly 250 yards through the air with three touchdowns.

Western Michigan University transfer Cam Coleman racked up 156 all-purpose yards between receptions and kickoff returns. He was one of three Tigers to catch a touchdown pass versus Holmes.

Linebackers Tayvius Duckett of Iuka and Jamarcus Smith from Saltillo paced Northeast with a 21 tackles between them. Horn Lake’s Tony Washington had six tackles plus a forced fumble as well.

The Trojans’ matchup with the Tigers serves as their season opener. Mississippi Delta’s week one contest at Northwest Mississippi Community College was cancelled at the last minute.

“We kind of have an idea what they’re going to do on defense, but offensively we have no clue,” Davis said. “We’re going to have to be pretty basic to start out with and then we’ll see how the game progresses and goes from there.”

Mistakes have plagued Northeast in recent face offs with the Trojans. The Tigers have committed eight total turnovers, including seven interceptions, in two consecutive losses to Mississippi Delta.

This is Northeast’s sixth all-time tilt on a Friday. The last such occurrence in the regular season came exactly 66 years ago to the date on October 9, 1953 when the Tigers defeated the University of Tennessee at Martin (then-Martin Junior College) by a score of 26-14.