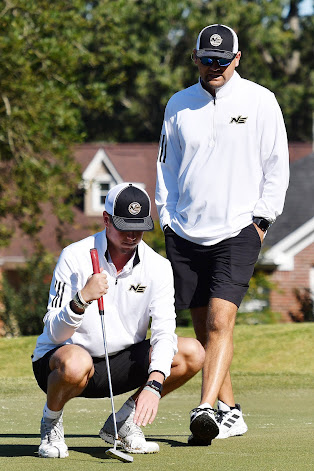 The Northeast Mississippi Community College golf team one-upped its results from the inaugural tournament of the season and made history in the process.

The Tigers ran away with the initial Mississippi Association of Community Colleges Conference (MACCC) event of the 2020-21 campaign, which was held at Shiloh Ridge Athletic Club from September 28-29.

It was the first championship for Northeast since the 2008 National Junior College Athletic Association (NJCAA) Region 23 Tournament at Forest Country Club. Current Tigers head coach Derek DeVaughn was a sophomore on that team.

“I’m just so proud of them,” said DeVaughn. “Everybody played great. It’s real stressful out there when you’re on an island by yourself. I’ve been there and I know what it’s about so I’m just so happy to get the win.”

The Tigers survived a windy, rainy and cold opening day of the competition to take a slight three-shot advantage over Meridian Community College. Jake Kilcrease and Carson Wilder paced Northeast with a 1-under-par first round.

Weather conditions improved tremendously on the final day and so did the scoring as well. Kilcrease posted a career-low round of 68 to secure the runner-up position in the individual standings.

The Brantley, Ala., native had six birdies on the last day, including three over the final four holes. Kilcrease finished only one shot behind medalist Ethan Dyess out of Meridian.

“He’s worked to get here. I knew it was coming,” DeVaughn said. “I tell my guys a lot of times you can just hit it anywhere as long as it’s in play and just hit it again and that’s the thing he did. He focused on his shots and hit some great putts.”

Wilder temporarily took the lead from Dyess midway through the second day after draining a short birdie putt on the par-3 10th. He eventually claimed sole possession of fourth place with identical rounds of 71.

The Kossuth High School graduate had perhaps the top moment of the event. His second attempt on No. 3 from around 150 yards out landed on the green and rolled into the cup for an eagle.

Kilcrease and Wilder were named to the all-tournament team. It was the second consecutive such honor for Wilder, who tied for third at the NJCAA District D Tournament Preview.

Four Tigers landed inside the top 10 on the leaderboard after Austin Shaw and Austin Lauderdale finished in a stalemate for sixth and eighth, respectively, with totals of 147 and 148.

Garrett Gray was a key factor in helping Northeast pull away from their challengers after improving 12 shots on the last round. Chase Calvery produced a 159 while Connor Wilder carded a 172.

The Tigers now face their quickest turnaround of the entire year with the second MACCC tour stop beginning on Saturday, October 3 at Eagle Ridge Golf Course on the campus of Hinds Community College.

Northeast head golf coach Derek DeVaughn (right) talks with Tiger linkster Jake Kilcrease of Brantley, Alabama during a break in action on the par 5, 489-yard second hole at the Shiloh Ridge Athletic Club in Corinth. Kilcrease shot a four-under on the day to finish second individually.