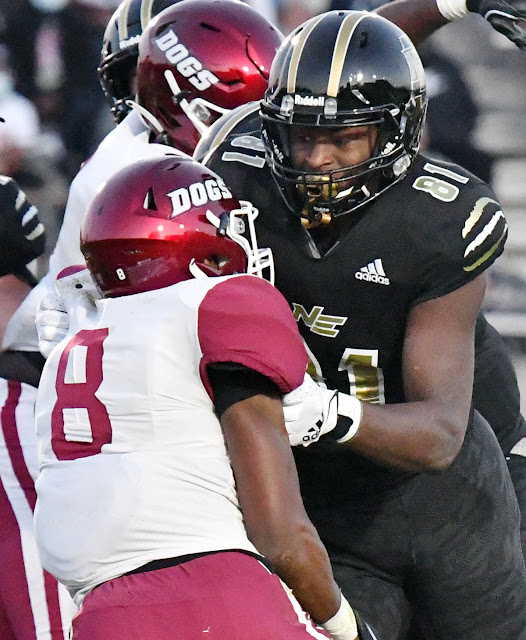 The Northeast Mississippi Community College football program welcomes a longtime rival in its home finale for the second consecutive year.

It is Northeast’s sophomore recognition night. A group of 26 sensational student-athletes will be recognized on the field at approximately 6:15 p.m. during the pregame festivities.

“We’ve done so much as a team and the sophomores have really kept us together,” said Tigers head coach Greg Davis. “We’ve got a good group and they’ve been through so much.

“When you look at some of these guys and their production on the field and their leadership and the way they command things is off the charts. They’ve been astronomical to our success right now.”

Those that cannot attend the contest can watch it live and in high definition on NEMCCTV. Tune in beginning at 6 p.m. for the pregame show by visiting www.nemcctv.com on any computer, smartphone or tablet device.

Amazon and Roku television subscribers can also view each of Northeast’s gridiron matchups by searching for “Northeast Mississippi Community College” on each respective app. The NEMCCTV feed will air on WRMG-TV in Red Bay, Ala., and Tishomingo County as well.

The Northeast Broadcasting Network also includes radio affiliate WOWL Fun 91. An audio simulcast featuring Jody Presley and Carter Smith, the Voices of the Tigers, can be heard on frequencies 91.9 FM from Burnsville, 92.9 FM from Florence, Ala., and 102.3 FM from Killen, Ala.

General admission tickets for this contest are sold out. No entrance to Tiger Stadium is allowed without your name being on a pass list as a family member of a participant on the band, cheerleading or football rosters, proof of a ticket purchase, a Mississippi High School Activities Association (MHSAA) state pass or a Northeast faculty or staff identification card.

The Tigers appear at No. 28 in the JCGridiron Dirty 30 rankings after becoming the first two-year college in the country to reach three wins. The Rangers are No. 11 in the same poll after claiming their season opener one week ago against Itawamba Community College.

Northeast (3-0) survived a rainy, windy homecoming game versus Coahoma Community College by a score of 13-10. The Tigers stood strong defensively by limiting their opponent to only one offensive score.

Linebackers Carter Bonds of Corinth, Tayvius Duckett from Iuka and Jamarcus Smith of Saltillo guide Northeast with a combined 86 stops, 8.5 tackles for loss and 2.5 sacks through three outings.

This matchup features two of the best defenses in the Mississippi Association of Community Colleges Conference (MACCC). Northeast is third in the league with 287.3 yards allowed per game while Northwest is fifth at 308 yards conceded.

Kevin Hurley leads the MACCC with six passing touchdowns. The Walnut native has completed 51.5 percent of his passes for 523 total yards and has an efficiency rating of 136.4, which is third best in the Magnolia State.

Andison Coby of Fort Lauderdale, Fla., has five receiving touchdowns, which is the most in the MACCC. He tops the Tigers and is third in the conference in with 190 yards as well.

Davis notes the offensive line, including starters J’Shun Bodiford and Will Derico of Montgomery, Ala., Tanner Lawson from Corinth, Brantley Prescott of Columbus and Jakob Welch from Winona, must continue to perform well.

“We’ve got to flip field position and really take control so big plays are the key,” Davis said. “We’ve got to control both lines of scrimmage. The battle is going to be won in the trenches.”

The second half has been particularly disastrous for Northeast in recent matchups with the Rangers. Northwest has outscored the Tigers on average 23-7 after the intermission over the last four meetings.

Northeast Mississippi Community College freshman tight end Calvin Jones (81) of Corinth has stepped in to help block for a line that has opened the way for the Tigers to have the second most offensive yards in the country (1,048), the third most rushing yards (383) and lead the MACCC in passing touchdowns (8)