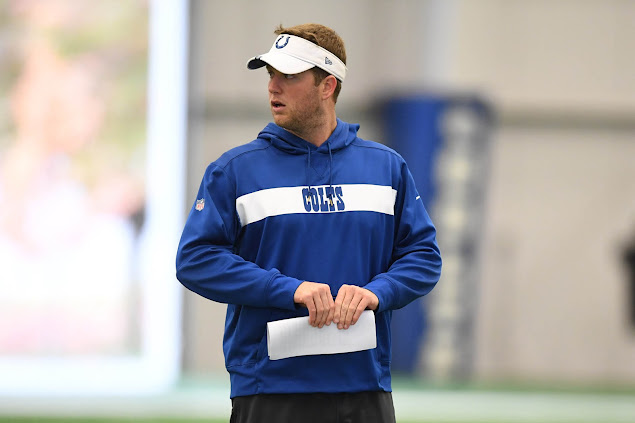 Parks Frazier is ready to once again feel the nervous chills that coincide with participating in a National Football League (NFL) playoff contest.

Frazier and the Indianapolis Colts are set to visit the Buffalo Bills in the first game of the 2021 NFL postseason on Saturday, January 9. Kickoff is scheduled for 12:05 p.m. with CBS handling the television coverage.

“I get goosebumps just thinking about it,” said Frazier. “There’s nothing like it. This is what you play for. The adrenaline rush of knowing that you’ve given yourself an opportunity to make a run. Now we’ve gotta do something with it. We’re gonna hopefully make the best of it.”

Frazier, who led Northeast Mississippi Community College to the state playoffs as its starting quarterback during the 2011 campaign, is in his third year as a member of the Colts’ instructional staff.

The Corinth native was the assistant to Indianapolis head coach Frank Reich from 2018-19. Frazier received a promotion to offensive quality control coach prior to the beginning of this season.

“I really enjoyed my first few years being very involved with (Reich). He’s one of the best guys I’ve ever been around as a person and as a head coach. But it’s been really good transitioning into more of my passion.”

This is the second postseason appearance for Indianapolis since Frazier’s arrival. The Colts defeated the Houston Texans in a Wild Card matchup before falling to the Kansas City Chiefs in the 2019 American Football Conference (AFC) Divisional round.

Frazier was assigned by Reich to prepare weekly practice plans, call sheets and scripts during his initial role with Indianapolis. He also assisted the Colts with their scout team preparations.

He gets to work much closer with Indianapolis’ exceptional athletes in his new position. That includes veteran quarterback Philip Rivers, who has thrown for more than 4,000 yards and 24 touchdowns this season.

The Colts also benefit from the talents of 1,000-yard rusher Jonathan Taylor and T.Y. Hilton, who tops his team with 762 receiving yards. Frazier notes that each player on the roster is open to feedback despite their own personal knowledge and natural abilities.

However, his ultimate goal is to keep climbing the ladder in the NFL and eventually become a head coach. Frazier recognized his current boss, Reich, as one of the motivating factors to his future objective.

“Honestly, being an NFL head coach never crossed my mind. Pretty much my goal was college,” said Frazier. “But seeing somebody do it successfully at this level just gave me the confidence and the passion to want to do it for myself.”

Frazier guided the Tigers to the runner-up spot in the Mississippi Association of Community Colleges Conference (MACCC) North Division with a 6-4 record during his lone season on the Booneville campus.

He completed 47.7 percent of his passes for 973 yards with 12 touchdowns through the air, which was sixth most among all quarterbacks in the MACCC. Frazier concluded his playing career at Murray State (Ky.) University.

Frazier and the Colts are confident entering their contest against the AFC East Division champion Bills, who feature another Northeast alumnus in starting defensive end Mario Addison.

“All year we’ve seen that when we can put together a full team performance where offense, defense and special teams are clicking then we can play with anybody,” Frazier said. “We’ve preached all year to find a way to get better every single day and I feel like this team has done that.”

Indianapolis assistant coach Parks Frazier, who started at quarterback for Northeast Mississippi Community College in 2011 and is from Corinth, overlooks a practice at the Colts’ home facilities. Frazier and the Colts are scheduled to open the 2021 National Football League (NFL) by visiting the Buffalo Bills on Saturday, January 9. This is Indianapolis’ second postseason appearance with Frazier on its staff.