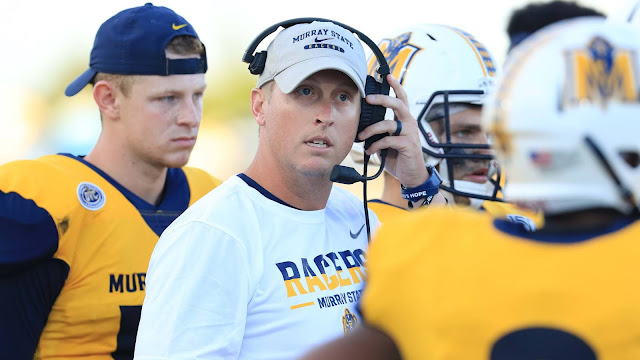 A highly competitive coach that has developed talent and posted prolific numbers throughout his career hopes to do the same at Northeast Mississippi Community College.

Nick Coleman, who has a decade of experience instructing at various levels of college football, joins the Tigers as their new offensive coordinator.

“Nick understands exactly what you have to do in our league,” said Northeast headman Greg Davis. “He likes to put the ball in the air, but he’s not afraid to run the ball either. I’m really excited to see him work with our kids.

“Nick brings a wealth of knowledge. He knows how to develop players and he understands the nuances that are going to be very good for these young men such as how to get open and how to read progressions.”

Coleman comes to the City of Hospitality after serving in the same role at Murray State (Ky.) University over the past two seasons. His other NCAA Division I coaching stops include Middle Tennessee State University and Tennessee Tech University.

“Being here at Northeast is a true blessing not only to me, but for my family,” Coleman said. “The best thing about this job is being back in Mississippi and recruiting. We want to emphasize speed, athleticism and basically finding guys who love football. This is a tough league and you’ve got to love it to go out there and do what we do.

“We want to treat things like basketball on grass. We treat our receivers like we do two-guards and three-guards. Our big guys we treat like (post players) and the quarterback is the point guard. The running backs will lead the team in touches. We want to make sure our guys are confident and have fun in what we do.”

Coleman guided Murray State to a top four finish inside the Ohio Valley Conference (OVC) in 2018. The Racers averaged 34.3 points per game in league play and eclipsed the 40-point mark in four outings that year.

Drew Anderson was the star of Coleman’s offense during his initial campaign at Murray State. The transfer from the University of Buffalo (N.Y.) threw for 2,864 yards, which is tenth most in a single season in school history, and 20 touchdowns.

Anderson led the OVC with 23.5 completions per contest. He guided the Racers to their biggest comeback ever against then-No. 19 Southeast Missouri State University by tossing season-highs of 412 yards and four scores on the way to 34 unanswered points.

He was selected to the All-OVC second-team after accumulating four 300-plus yard performances. Anderson signed with the Arizona Cardinals of the National Football League (NFL) following his lone year under the watch of Coleman.

Anderson completed 18 passes for 206 yards with two touchdowns during three preseason matchups for Arizona in 2019. He was eventually promoted to the Cardinals’ active roster during week 17.

Murray State did not miss a beat upon Anderson’s graduation as Coleman groomed Preston Rice into a more than capable starter behind center. He racked up nearly 3,300 yards and 22 scores between passing and rushing during his sophomore season.

Rice pieced together a dominant effort versus Eastern Kentucky University last October. He completed 67.2 percent of his passes for a career-best 373 yards with a pair of touchdowns in a heartbreaking loss to the Colonels.

Coleman spent the 2017 campaign as the quarterbacks coach and run game coordinator at Tennessee Tech. The duo of Andre Sale and Luke Ward helped the Eagles place as the third ranked passing offense in the OVC.

The Decaturville, Tenn., native started his professional career as a graduate assistant for his alma mater in Middle Tennessee State in 2010. The Blue Raiders won six contests and met Miami (Ohio) University in the GoDaddy.com Bowl.

Coleman accepted his first full-time position at Faulkner (Ala.) University as its offensive coordinator. The Eagles made their inaugural appearance in the National Association of Intercollegiate Athletics (NAIA) rankings following his arrival in 2012.

Hollingsworth’s career numbers in a Faulkner uniform included 11,532 passing yards and 111 touchdowns. He accounted for 4,367 yards and 42 scores through the air during his senior campaign alone.

The Eagles went 15-8 during Coleman’s two-year stint and reached the NAIA playoffs for the first-time ever after winning the 2013 MSC West Division championship. Faulkner topped the NAIA in total offense with 590 yards per game and was second in scoring with an average of 48 points during its banner season.

Coleman got his first taste of the rugged Mississippi Association of Community and Junior Colleges (MACJC) in 2014 by taking over offensive coordinator duties at Itawamba Community College.

Bender and Griggs were both MACJC All-State honorees that tallied more than 2,000 passing yards each. Itawamba paced the MACJC and was third in the National Junior College Athletic Association (NJCAA) with 563.2 yards each outing in 2016.

Coleman was a quarterback himself at Middle Tennessee State from 2006-09. The Blue Raiders captured a program record 10 victories during his senior year, which culminated a triumph over Southern Miss in the New Orleans Bowl.

He has earned both Bachelor’s and Master’s degrees from Middle Tennessee State. Coleman and his wife Kelly have two children, Eli and Sophie.

UK_Coleman: Nick Coleman looks on as Murray State (Ky.) University takes on the University of Kentucky at Kroger Field on September 15, 2018. Coleman has been hired as Northeast Mississippi Community College’s new offensive coordinator.